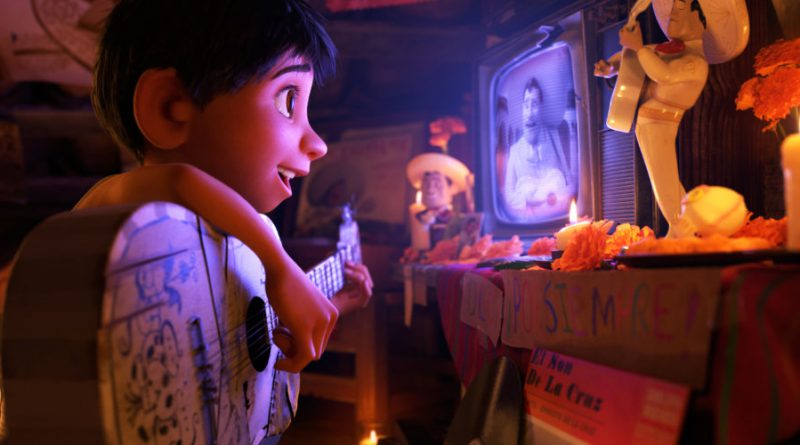 Walt Disney himself made a research trip to Latin America, named the Goodwill Tour.  At the behest of the Roosevelt Administration in 1941, Disney and a team of artists and animators traveled to several Latin American countries to draw inspiration for filmmaking. The culmination of their efforts produced several WWII-era films, including Los Tres Caballeros.
–
Growing up, my siblings and I endlessly watched the Spanish-language version of Los Tres Caballeros from a grainy VHS tape. It was one of the closest things we had to cartoons “for us” in the 90s. I loved watching the adventures of Mexican rooster, Panchito Pistoles, seen playing on a beach in Acapulco and dancing with jarochas from my homeland, Veracruz. Not-so-much a caballero, Donald Duck devoted himself to wildly chasing Latina love interests, including Carmen Miranda’s younger sister, Aurora.
–
As I revisited several Disney films…comenzaron a perder su encanto. Disney’s 1995 Pocahontas is a dangerous re-writing of history. Meanwhile, Los Tres Caballeros portrays Mexico via vignettes of vacation culture. Hollywood films set in Latin America are too-often replete with storylines centering United States tourists exploring Mexico alongside an underdeveloped line of local characters, while the land is mostly utilized for an exotification, othering, or party-going factor.
–

Disney / Pixar’s Coco resonates with me in recognition of the inaccuracies that film companies have made in portraying Mexico, Latinidad, and indigenous history. Coco is among recent films that inspire me to believe that the next generation of Latinx will have films that reflect us in every way possible, from the seeds of storylines to final production. Beyond laurels of representation, Coco is replete with artisan handicrafts and local expertise that hold implications for tourism and commercialization of products, a tangible economic impact on communities in Mexico.  The film’s theme on Day of the Dead or Día de Muertos especially demands conscious understanding of the sacred tradition.

Forbes Contributor, Gretchen Kelly, has suggested the prospects of Coco’s success for tourism to Mexico. “When contacted, Adventures by Disney commented that no current plans for Coco-inspired trips were on their horizon” while Kelly assumes that if Coco’s popularity holds, “places connected with the film will soon be front and center on Disney’s travel itineraries”. Disney’s attempt to trademark Day of the Dead backfired, so the corporate giant has reason to be cautious and eschew a “Coco cruise.”

In Mexico City, where Día de Muertos celebrations have grown, “[s]ome Mexicans complained that their compatriots – especially those in the upper classes – only embraced their traditions after Hollywood made it cool.” This critique emphasizes the positionality of Día de Muertos as rooted in indigenous practice and the risk of cultural reductionism, which packages tradition as a consumerist “trendy” item while overriding discussions about anti-indigenous sentiment and systems of marginalization. Given media attention to Día de Muertos, entrepreneurs and businesses have sought ways to avoid cultural appropriation, referencing discussions on the intellectual property of indigenous communities.

Mexico’s capital during Día de Muertos holds remembrances that are both solemn and festive. In Mexico City’s historic center, La Ofrenda Monumental, or the Great Altar, is set up annually.

The altar in 2016 featured trajineras, known as pre-colonial canoes, honoring individuals who had passed away during the year, including Juan Gabriel. The trajineras also granted visibility to social causes and problems in Mexico. In 2017, the set up honored rescue teams, volunteers, and communities affected by the record-breaking earthquake and devastation a few weeks prior. Beyond these examples of public initiatives, families intimately set up altars for their loved ones.

After Coco’s release in Morelia, the film became the biggest box-office success in Mexico’s cinematic history. For the town of Paracho, Michoacán, Coco’s release brought a wave of orders for pearl white guitars. Paracho is a pueblo renowned for its generations-old tradition in guitar-making. It is also the hometown to Germán Vázquez, a Los Angeles-based guitar-maker who was sought by the Coco film team to create Miguel’s guitar. Since the film’s release, Paracho guitar-makers have worked overtime to satisfy demands for Coco-inspired instruments. Vázquez was recently recognized in his hometown where sales of guitar replicas have bolstered the local economy.

Coco’s fictional town of Santa Cecilia, home to a “legendary movie star,” is based on locations in Oaxaca or Michoacán. If Santa Cecilia were a real-life town, it would arguably be a Pueblo Mágico given its portrayal of town lifestyles. Overseen by Mexico’s Ministry of Tourism, the Magical Towns program is a designation granted to towns with demonstrated tourism initiatives and who have sites of symbolic and historic significance. Selected towns receive funds and official status, which is a boon for attracting tourism.  At present, over 100 sites in Mexico are Pueblos Mágicos, with more sites vying for status. When municipalities lost their designation in the past, local officials described it as a shock to economies with dependence on tourism. Community members have shown concern for ensuring cultural preservation while not essentializing towns to mere tourist stops. Underlying the tourism program is a complicated web including urban planning, profits, sustainability, and the politics of hospitality.

Latinx and immigrants often remember their homelands and ancestors as having magical elements in their own right. Whether it is the nostalgia from a previous life or the feeling of missing one’s loved ones, Coco aimed to capture this spirit.  For me, the cemetery where my grandfather rests in rural Veracruz felt depicted in the film. Last spring, I visited the cemetery and watched my abuela gather flowers to decorate her husband’s grave. As we cleaned the area, I realized that my grandfather is next to our ancestors from the 1800s.  For us, this space continues to be sacred.

Editor’s Note: An interview and commentary of the film Coco is set for release by the Harvard Kennedy School Journal of Hispanic Policy in spring 2018.

Headline Photo : The town of Paracho, Michoacán, famous for its guitars, has experienced high demand for replicas of the white guitar in “Coco”  (Credit : Disney / Pixar)