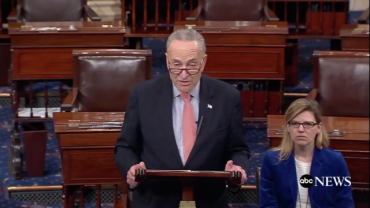 This article was originally published on The Hill.

Senate Minority Leader Charles Schumer (D-N.Y.) is predicting Congress will be able to pass legislation this year to protect a key group of immigrants after Republicans ruled out including a deal in the December government funding bill.

“I am confident that there is strong bipartisan support in Congress to get the [DREAM Act] passed before the end of the year,” Schumer said in a tweet on Thursday.

He added “we are going to do everything we can to get it done, no matter what the president says on one given day or another.”

Schumer’s comments come after President Trump and Senate Republicans agreed during a closed-door White House meeting that they would not include a fix for the Deferred Action for Childhood Arrivals (DACA) program in an end-of-the-year spending bill.

The Development, Relief and Education for Alien Minors (DREAM) Act, similar to DACA, would allow immigrants brought into the country illegally as children to work and go to school without the fear of deportation.

The Trump administration announced that it was phasing out DACA, setting up a deadline in early 2018 for lawmakers to pass legislation. If they don’t, hundreds of thousands of immigrants will be at risk of being deported.

Sen. John Cornyn (R-Texas), who took part in Thursday’s White House meeting, said it was likely that Congress would take up legislation in January or February.

“This is not going to be part of the year-end omnibus or [continuing resolution],” he told reporters, referring to a short-term funding bill.

Democrats want to pass an immigration agreement this year that would pair a DACA fix with border security. They argue the end-of-the-year spending fight gives them more leverage on immigration because Republicans will need their votes to prevent a government shutdown.

“We have to find a way to get this done before the end of the year,” said Sen. Dick Durbin (D-Ill.). “[This] limits the opportunities.”

Sen. Kamala Harris (D-Calif.) has threatened that she won’t support a government funding bill unless there is at least an understanding of how they will address the immigration fight.

The government is scheduled to run out of money after Dec. 8. Activists have viewed the end-of-year funding negotiations as their best, if not only, shot to get an immigration bill cleared through the GOP-controlled Congress.