Home > Op Ed > It Hit America Like a Powerful Earthquake 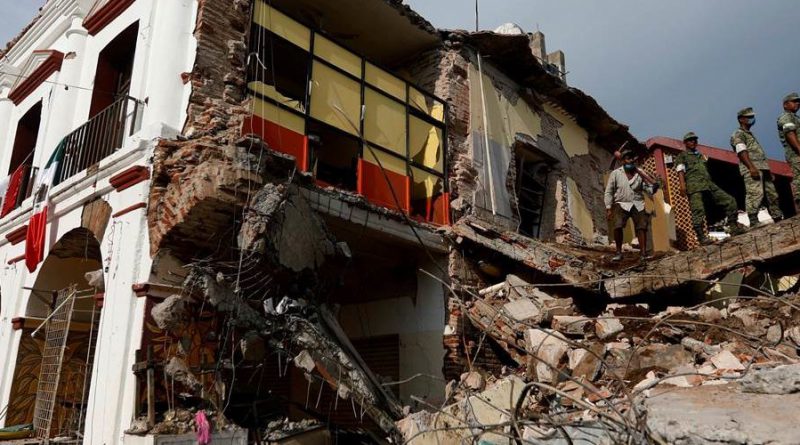 This piece is published in the Tufts Daily here and reprinted below.

On Tuesday, Sept. 5, one day after Labor Day, the American people received news that the Deferred Action for Childhood Arrivals (DACA) program would be ended. The news sent shock waves through many communities, creating a state of uncertainty for more than 800,000 young people. The timing was a cruel joke — coming after a holiday celebrating the fruits of labor to the country, families and individuals — denying thousands the future opportunity to contribute their labor to the U.S.

DACA was never intended to be a permanent solution for its young beneficiaries — it was a temporary and mediocre solution that kept all of these young, talented Americans in an endless state of limbo as they had to apply every two years for renewal of their status. But at least it kept these dreams and hopes alive, and this is why the announcement hit America like a powerful earthquake, knocking down these dreams and hopes.

Ending DACA not only puts the livelihoods of these young Americans in permanent limbo by taking away their ability to work, to study and to live their lives in the only country they have ever known, but is also wrong from every political, economic or social perspective.

Imagine Ana, a 5-year-old, who was born in the most impoverished city in Italy, and whose parents decided they would risk everything to come to America to give their daughter a better life. Most of us either have a son or daughter or have been around a young child and we would do anything for them, especially in the face of suffering.

Ana had no power to dissent from the decision her parents made to bring her to America. She grew up speaking English, learning U.S. history, pledging allegiance to the flag of the United States and dreaming like any other child does about what she would become when she grew up. By the time she turned 17, her friends, boyfriend, cheerleading coach and neighbors whom she knew her entire life saw her as no different from themselves. In fact, she has excelled academically, she is an outstanding athlete and she is ready to get her college degree and begin competing for jobs to eventually add value to our economy.

As she began to look for schools to apply to, her parents and school guidance counselor informed her that because her parents were not able to attain American residency during the 12 years she has been living here, she would not be able to go to college or work. At that very moment, Ana’s life took a drastic and tragic turn. She had nowhere to run and nowhere to hide. It was as if her home, her friends, her achievements and her dreams were suddenly washed away. All she wanted to do in that moment was to drown in her own tears while all of her friends and classmates got ready to go to college and pursue their dreams.

Recognizing that this problem was happening to many children in our country and lacking legislative action by our elected officials, President Obama put DACA in place to help young Americans like Ana have the ability to continue their lives. DACA does come with a lot of limitations, but these young Americans at least knew they would be protected from deportation.

DACA participants — young American men and women — have, for the past five years, been able to look past the frightening insecurity of potential deportation and focused on attending college, earning a degree, and starting careers. Now with this action their status as Americans is being taken.

This is why the attorney general’s announcement went through family dinner tables, through school libraries, through churches, through major economic sectors and through every part of American society, like a powerful earthquake knocking down dreams and crushing hopes to the ground.

Ending DACA goes against every political, economic or social lens through which American leaders make decisions.

Politically, ending DACA, which has had bipartisan support from political organizations, members of Congress and advocacy groups, has created more backlash and turmoil for an administration that has had trouble focusing on its “Make American Great Again” agenda because it has not been able to work with Congress on major legislative issues.

Passing immigration reform was not part of the administration’s immediate agenda, but ending DACA and giving Congress only a six-month window to take action will force it to take on major immigration reform legislation, which it did not anticipate. This is on top of other big-ticket legislative items, such as health care, tax reform and “the wall,” as well as a budget and the debt ceiling.

Ending DACA creates more noise for an administration that needs more focus in its governance strategy. According to a Morning Consult and Politico poll, 78 percent of American voters support giving “DREAMers” the chance to stay permanently in America, including 73 percent of people who voted for President Donald Trump.

Organizations and industries, from chambers of commerce to the agricultural industry to major academic institutions, have voiced their support for DACA based on economic factors. Here is what Julissa Arce, an immigrant who became vice president at Goldman Sachs by age 27 while being an undocumented immigrant, had to say in a Fortune article:

“The same study estimates that ending DACA would reduce the nation’s GDP by $433.4 billion over a decade. Another study by the Immigrant Legal Resource Center states that 685,195 young immigrants would become unemployed immediately, causing employers to incur $3.4 billion in costs associated with the termination and replacement of employees. Without DACA, tax revenue would be seriously impacted. Over the next decade, $24.6 billion in Social Security and Medicare contributions would be lost.”

Socially, it’s immoral to devastate the lives of so many young people who are adding more value to our country. From a human rights perspective, leaving almost one million people stateless is inhumane.

Economically, morally, politically, socially: from every perspective, ending DACA is the wrong move for our country and for these young people. But with every crisis comes an opportunity to fix the wrongs in our society, and to bring unity in places where it is absent. The many young Americans who are being affected by this decision may not be able to sleep knowing that their future and that of their family is uncertain. While many of us are not affected directly, I don’t know how any of us could sleep at night either. The responsibility to act to protect these young people is now in the hands of your elected Representatives and Senators, which means it is in your hands too. These young fellow Americans will need all of the help that they can get, and by taking five minutes of your time you make a huge difference in their lives.

Follow the link to contact your Representative and Senators via phone or email and simply state that we need to find a legislative solution for these young Americans.

Fixing this problem is economically smart, moral, politically feasible and socially the right thing to do.

Camilo Caballero is currently pursuing his Master’s Degree at Tufts University in the Fletcher School of Law and Diplomacy, where he is specializing in international law and human security. In addition, Camilo served as Director of External Affairs for the Harvard Journal Hispanic Policy, and as founder and Co-Leader of the Fletcher Students of Color & Allies club. Camilo Caballero was born in Colombia and raised in the State of Georgia, Camilo has devoted his educational career to the empowerment of underrepresented communities in the U.S. and abroad. While pursuing his Bachelor’s Degree, Camilo served in various leadership roles in Georgia with state government agencies, political campaigns, and non-profit organizations, where he supported economic development efforts, worked with government agencies to promote college education, and volunteered with Latino community advocacy groups. During those years, Camilo also served as an intern at the U.S. Embassies in Madrid and Lima, where he worked on promoting U.S. culture and democratic values to foreign audiences.