Home > Blog > An Open Letter from Undocumented Immigrants: Why Comprehensive Immigration Reform Matters to All of Us 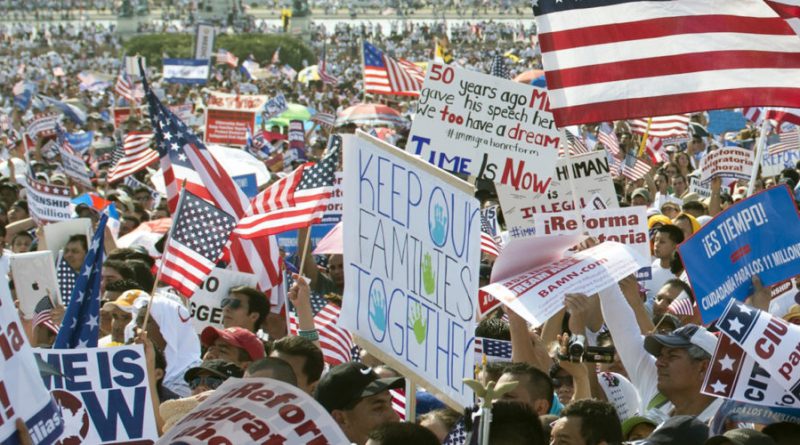 While on a recent trip to the Ellis Island museum, I had an opportunity to reflect on the 12 million immigrants that shaped and continue to define this great nation we call America. I am always disappointed when critics pose the dueling question why do we need Comprehensive Immigration reform? Seldom do I argue with such critics, but given the interrelatedness of immigration and our nation, I feel compel to inform the masses of about our sad history with regard to the treatment of immigrants. The national dilemma of securing our borders has been one of our fundamental policies during the last 20 years, not only for our national security interest, the war on terror, but also reducing the inflow of immigrants who we often deem “illegals” or “undocumented.”  The conclusion of the 44th and the commencement of the 45th Presidency have again left a nation of immigrants scrambling to come to terms with Comprehensive Immigration reform and its ramifications. The American values and rich tradition in welcoming immigrants has been tested as our democracy now seek to come to common ground on this ever important, but controversial public policy. Yet, this debate has taken away the best of who we are and the ambivalence of what we can become as a society.

Comprehensive Immigration reform has implications for America’s future that most of us cannot foresee—socially, culturally, and economically. The status of some 12 million undocumented immigrants, who have already shaped and defined a new American landscape, remains in limbo as our politicians try to reach a compromise on how we address immigration reform. The question remains: how do we address this issue without accumulating the backlash from human rights activists, American citizens, politicians and more so can congress passing legislation in a constitutional and humane manner? There hasn’t been a time our country’s great history that a debate on immigration divided the nation as it has recently done, leaving us searching for an American identity as to who we are and what we stand for as a nation of immigrants. This debate has left the United States of America divided along racial, ethnic, political lines never seen before and has touched the conscious of a healing and battered nation. Not only has the debate gone beyond the boundaries of our socio-economic-political spectrum but the lack of humanism becomes pertinent and indicative of our reform immigration policy. The debate has become such a divisive issue that policy-making and our political process went hand in hand in the 2008, 2012, and 2016 Presidential elections.

As history reminds us, undocumented immigrants have become the most convenient scapegoat for America’s social problems, thus anti-immigrant rhetoric has become prevalent and a norm throughout our political spectrum. Center to the immigration debate revolves around amnesty that serves as a pathway to citizenship for the 12 million human beings, who are often referred to as “illegals” or “undocumented immigrants.” Yet, despite this abrasive terminology, no human being is illegal. The issue of Comprehensive Immigration reform has become the focal point of all immigrants and Americans alike, but none more important than America’s flourishing Hispanic population and their socio-economic-political importance. The “Browning of America” and the continuing reshaping of America by Hispanics continue to define who we are and enhance the best of what we can become as a nation of immigrants.

The Comprehensive Immigration reform debate goes far beyond the typical immigration debates on the loss of jobs, drain on our social system, criminals etc., it has now vested in “Building a Wall.” The economic, political, and social clout of current immigrants is far more beneficial to the nation than our media, immigration critics, and politicians point them out to be. Whatever the debates are, our American values, tradition of welcoming immigrants, and our Americanism will be tested on how we approach and legislate the new Comprehensive Immigration reform laws. This complicated but imperative public policy must be achieved by the new Presidential administration for a number of reasons. It is imperative that this legislation must be also done in a humanistic, sensitive, and compelling way that make us American with our true values of embracing diversity and inclusion of all. Embodied in this reform legislation, one must be cautious, compassionate, and not forget the watchwords of our immigrant history and our nation; “Give me your tired, your poor, your huddled masses yearning to breathe free.”

First and foremost, Comprehensive Immigration reform must be done in a humanistic way that makes us a nation that still champions human rights and diversity. As the leader democratic free world, history reminds us of our vast atrocities of human rights violations; Slavery, Trail of Tears, Mexican Repatriation Act, and last but definitely not least, Japanese Internment. Hence, can we conclude, is American history doomed to repeat itself? Human rights becomes the center of the debates, how do we address families who have lived here undocumented for decades, their children who grew up in American communities, who have established friends, loyalty, and community relationships? This legislation must be done in a humanistic way that takes precedent over our recent abrasive political rhetoric emanating mostly from frustrated Americans. We must be cautious and vigilant on how we plan to address America’s greatest resource–immigrants; it must be done with an approach filled with love and compassion. The breaking up and removal of families who have solidified their roots here is un-American, un-constitutional, and it is not what we stand for as a country that professes tolerance, diversity and acceptance.

As we delve into the deep waters of American patriotism, the cultural backlash that takes credence is founded on the philosophy that many of the undocumented immigrants are un-patriotic towards America’s culture and refused to be American. Hence, one would question what is or not to be American, is there a threshold to gauge our Americanism? This debate has not only generated dialogue about the continued role that Americanism plays in our society, but has also posed the question of whether undocumented immigrants are truly committed to the “Land of the free and the home of the brave.”  The issue should NOT be whether undocumented immigrants are loyal to America, that question was answered when undocumented men and women signed up and served in America’s military. Fighting to protect and promote democracy throughout the world for a country that has remained uncommitted to them. It must be noted that some 38,000 military officials serving in both Iraq & Afghanistan wars were not American citizens. In fact, history has forgotten that Lance. Cpl. Jose Gutierrez became one of the first casualties in Iraq; yes, he did come to America illegally and died serving America’s cause. Hence, the question is not whether undocumented immigrants are loyal to America, but whether America has lived up to its rich tradition of welcoming immigrants in a fair and impartial way.

An interesting report released by the Social Security Administration in 2013, Stephen Goss, Chief Actuary for the Office, claimed that undocumented workers contribute about $15 billion a year to Social Security through payroll taxes. On the flip side, Goss also commented that these undocumented immigrants only receive about $1 billion since many of them are not eligible to receive benefits that they paid into. What is more astonishing, Goss noted in an interview for the New York Times, articulated that undocumented immigrants have contributed up to $300 billion, or nearly 10 percent, of the $2.7 trillion of the nation’s Social Security Trust Fund. In other words, their economic contribution and benefits to society far outreach many of the criticism undocumented immigrants face. The need to reach a humane solution on this immigration nightmare will ultimately benefit all, Americans alike. Hence, there is a need to create a legal path to 12 million residents enabling them to come out of the shadows of despair and allow them to continue contributing to the American economic pie in a fair and just way that’s benefits all.

Last and by no means least, center to argument is the breaking and outright disregard of American laws by undocumented immigrants, after all we are a nation of laws. I do concur with all Americans that our laws are to be respected, acknowledged, and obeyed by all. As American patriot, Reverend, and Civil Rights Activist Dr. Martin L. King, Jr. noted that there are two types of laws: just laws and unjust laws. Dr. King further elaborated one has not only a legal but a moral responsibility to obey just laws, “but conversely, one has a moral responsibility to disobey unjust laws.” I must remind the American masses that slavery, racism, removal of Native Americans from their land, and Jim Crow segregation in American society was LEGAL, and Dr. King, his non-violence movement for Civil Rights, the Abolitionist movement in Southern states were considered ILLEGAL in the eyes of the law. Seldom, do I ever pause and critique our legal process, but Americans openly voiced their disgust on undocumented immigrants’ willingness to break our laws. Yet we refused to critique unjust laws and customs that haunt our national history. It becomes paradoxical in our society when many of our laws that has perpetuated many of our ignorance and hatred towards others are obeyed and respected throughout our history. When we openly advocate obeying and dis-obeying laws that are there to maintain law, order, and stability but at the same time fail to question the validity of those laws, we ultimately become immune to the hatred we create.

As long as we have double standards in our society, as long as our President Donald J. Trump and other billionaires insisted that they avoided paying taxes by merely exploiting tax loopholes-legally, our legal integrity and our laws must be examined. As long as there is criticism on undocumented immigrants for not paying their fair share of taxes but at the same time Americans remain silent as our President and other billionaires’ failure to pay federal taxes, hence, we have the right to question the integrity of our laws.

America is only as great as the doors and opportunities we open to others, Comprehensive Immigration reform matters because America matters, our nation’s trajectory is at stake. Immigration and America go hand in hand and without each other, there can be no true immigrant nation. Success in America is not determined by our ethnic background or our native language but our commitment and dedication that is so much part of our past and present immigrants. American history will remind us that oppression takes away the best of who we are and what we can become as a nation. America’s passion of including all that choose to come here has been to cornerstone of our history, democracy, and constitutionalism. Without this inclusiveness of all ethnic groups, the American Dream would not be possible.

About the author: Stephen Balkaran is an Instructor in the Department of Philosophy at Central CT State University.